The Demigods of Power and Might:  Militarism & Media – Religion & Racism OpEdNews.com Headlined 9/26/16

“We used to be able to hang ‘em and nobody bothered,” I heard a neighbor say to the mailman when I was in elementary school, but until I, like Rod Steiger, saw Sidney Poitier slap Larry Gates, In the Heat of the Night, I didn’t really understand:  This is the essence of America’s struggle to live, “We hold these truths to be self-evident…”

Yes, strengths and weaknesses abound over the gamut of our flip-flopping politics – both good and bad reaching across the aisle — violence & hypocrisy, risks & failures Left, Right and Center.  However, those who believe in whitewashed history books dearth of truth, are as godless as they claim to be Godly — wrapped in the flagstone of myth.

More fragmentized than American mosaic, our extreme political and social bookends have become this Democratic Republic’s albatross, bending its back on the backs of forgotten or ignored history — The Right has become extremely wrong.

Now our Ship of State seems mired in the muck of military rape, corporate owned media, religious hypocrisy and racists’ hate, anchoring The Land of the Free in the port of revisionist history, walled in by vain glory of trumped up greatness, crying out like a voice in the wilderness for the young to save the old from the rigidity of past sins against charity begins with love thy neighbor as thyself.

Independence & Independents, Liberals & Moderates, advocates and activists, undecided Baby-Boomers and sulking Millennials – there is no longer a fork in the road – there is only forward to progressive renewal or back the way we came.  Although, getting centered is a goal worthy of the common good, there is no more in-between.

In 2016, being deplorable both comes from and raises fears that America’s heart has beat too hard for too long.

The new reality:  with an open mind, it’s easier to see our leaders of industry & unions, private enterprise and all levels of government are merely the boat – and when we vote against repeating the gender bias and racial discrimination of our past, We The People are the power of the wind — and the ocean on which all sail.

Regardless of national heritage, political hope, gender claim, income race for equality, whether LBGTQ or not, if we desert the system, and Democrats, this will become ensconced as authentic American:  belittling the disabled, faith in bigotry, hate transparency and permanent second-class citizenship for people of color, girls and women – echoing the blatant hypocrisy of the Voting Rights gutting Chief Roberts decrying, Brown vs. Board of Education at the opening of the Smithsonian’s new African-American museum.

A trumped nation will resound in main-stream ensemble like this:  It is for us The Right People, tea stained or red tied, to lead us not into the temptation of loving our neighbor as ourselves, but rather deliver us from the evil of Black Lives Matter, as we, the too conservative to see forward, Free Will ourselves to the promised land of blessed assurances that white might is our right.  Praise the Lord, pass the trumpet that finally silences, Lift Every Voice and Sing, so we are washed whiter than snow, free from the blood of any color.

Whether dreaming forward or looping our rear-view mirror, what we do between day-break and dusk is the only difference we make.

There are millions of Americans of every political, racial, sexual and spiritual hue, wealthy and not, who are descent, loving and giving human beings, but unlike Henrietta Lacks, Sarah Gray, Sam Cooke and Sons of Bill – Donald Trump, and the GOP that Birthered him, are not among them.

But still I Believe!  Our civility and national unity save us from a trumped fate. 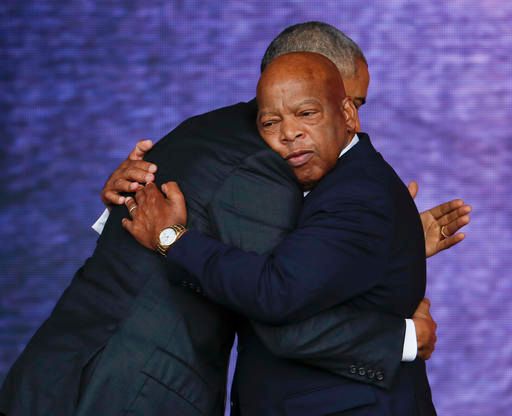 What do we have to lose from a landslide of Second Amendment salutes shooting down First Amendment rights, by rebuffing the embellishment of You’re a Grand Ol’ Flag’s Red, White and Blue, with shades of brown, black and yellow — Liberty and justice for all means, freedom is not limited to those of us resembling Paul Ryan, Mitch McConnell and a wannabe Birther-in-Chief.

Merely speaking one’s superman mind to twits with tasteless tweets, can’t transpose trending truth:  government is the problem transformed United We Stand into Capitol Hill dung heap.  When a people feel bullied, left behind, forgotten, deprived of the means to provide for themselves, hopelessness can express itself in a multitude of violent ways.

Surviving our Great Recession, by creating our great economic divide, we shouldn’t be shocked that, Shock and Awe, has been the light upon our pathway to a Divided We Fall potential.

Even the .1% are searching for an out-of-this-world exit from what they’ve created:  an electorate triad of the enraged, the repulsed and worst of all, the undecided.  Our elections have not always been a choice of the lesser of two evils, but what justification is there for choosing, by default or acclamation, the worst of two evils?

Truthfully, progression is better than regression, Constitutional gender equality beats income disparity and Marijuana can heal while opioids kill — so what the hell do you have to lose…

There is no greatness in Misogyny, Xenophobia, Islamophobia or Homophobia — and The Trail of Tears, Anti-Catholic, Antisemitism, No Irish Need Apply, Japanese Internment, racial segregation and Jim Crow gerrymandering remain historical antagonists to our greatness. — and those who elect to re-inject these nightmares into our American Dream, are not only deplorable, but delusional.

Which is worse, a bout of email pneumonia or being trumped into that which decays from within?  Hate is a boomerang with tentacles embedded by the embittered, blinded by nefarious nationalistic nonsense, aided and abetted by a media so hungry for notoriety, it’s easily nonplused into free press for the treasonous.

What do we have to lose:  Talent, Wisdom, Culture, Courage and our Humanity!

What do we have to lose:  Our open minds exploring the exceptionalism of truth and character!

Arguably, for the 185 years between July 1776 and January 1961, our white forefathers — immigrants all – of European descent, determined the destiny of America in part, by determining the destiny of all Americans who didn’t look like them.

Change, however, was inevitable and evolution, like revolution, chronic pain, but Revelation celebrates humankind’s potential transcendence, not its end.

In time, both good and evil will come to an end, for not even a nation’s oldest white oak can last forever, if decaying from within.

Nonetheless, there is one core value on which we can all agree:  To know what we have to lose, each of us needs to explore what’s at the heart of our individual, national and global struggle – before we vote.