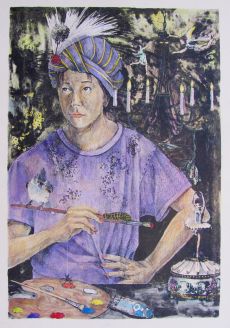 We remain a nation dedicated to following old angry men into fighting the last war with the next generation, instead of filling Congress, Judgeships and State and Federal Executive positions with them.  We are a people still defending freedom by oppressing those less fortunate, and citizens still confusing patriotic civic duty with, that’s not my problem.

Iranians, holding accountable their leaders, who, like Trump/McConnell think themselves above the law, reversing their approval of a, proportional response, to the precision outcome of a flippant presidential golf course order to takeout a celebrated murderer, that spared American lives, but killed 82 of their own – Trump impeachment headlines slide to third place, life-threatening Australian fires left to pleas from Golden Globe winners and Puerto Rican earthquake barely receiving an honorable mention.

The imminent threat to America is Americans transforming ourselves into separated solos, behind firewalls blinding us to the dangers of remote revenge transposing the ensemble of life on earth into collateral for Trumpism.

Yes potentially, we are better than the hypocrisy of Lindsay Graham, Mitch McConnell and Trump/Pence, yet we still allow their direction for America to determine our character.

Those over fifty may claim some degree of ignorance, as historically, government practiced, citizens should be seen but not heard, until stunned when sixties’ assassinations, the Vietnam War and Nixon’s exposed criminality not only woke the unknowing masses but jolted their mass appeal for, all we like sheep.

It’s not too late to save ourselves from the dragons of Corporatism who have always known the deadly dangers of their adroitly aimed addictions:  cigarettes, Opioids and fossil fuels – convincing millions, we couldn’t do without them, until we couldn’t – if seniors and Millennials unite.

Unlike the German originals and their American Neos, we cannot claim, we didn’t know concentration of love of money trading lives for lies and, being mesmerized by narrowing views, lured into tangling webs we ourselves weave with divisive chants of misinformation.

For better or worse, American births confirm, to whom much is given, from him much is expected, and everyday bears witness to how much more we’ve been given than others, despite allowing bankers, oil men & women and their political, and media, puppets to magnify economic gain as an escape clause.

In 1929 American industry, corporations and government knew, what a margarine commercial would imply fifty years later, it’s not nice to fool with Mother Nature, and did nothing to warn us; no industry adjustments, no Wall Street public service announcements, no government offer of freedom of choice.  Honestly, loving ever increasing convenience as we do, what would we have stopped, changed, or even slowed?

Would we have returned Mr. Olds’ Oldsmobile for a wagon train; recanted desertion of Mall Stores for Amazon packages stolen from our front porch?  Will we give up our Netflix streaming recliner when movie theaters get what Blockbuster didn’t, and lower movie ticket prices?

Blessings and Miracles, like Royal Marriages and foreign Markets, are a flawed evolutionary chain of events – and America’s tragedies and comedies, a mystery whose beauty resides in the eyes of the electorate – just as the chain of evidence links our dictatorial, practicing demagoguery imperialistic and impeached president to Iran’s conservative religious leader, Ayatollah Khamenei.

America isn’t immune to Newton’s third law.  The chain of revenge has come full circle from General Solemani, through Trump’s irrational hitjob to Iranian missiles snatching life from 176 souls – and with them, too perilously and unforgivingly close to stealing the last shreds of proof of America’s human decency.

We’re not separate and apart from the government we elect.  Yet we are better than Trump/Pence and deserve better than Mitch McConnell and his GOP corroding America – but we’ll never achieve it if our thoughts, focus and energy stop at such villains, instead of embracing a collective and individual pursuit of a life of loving excellence.

Truth that sets us free:  we can never return to what we thought normal before Trump, because that normalcy, trusting gender inequity and believing Facebook, elected him.

Truth is, the earth will live longer than all life upon it today, especially if we allow a Trump infested unencumbered conservative GOP to have its way:  ignoring the Constitution, raping our environment and degrading the presidency.

We can, nonetheless, be a 2020 Revelation:  more new beginning than assumption that, on Mars we’ll be able to eat money.

What does it matter if…

When we see kindred souls in each other and seize this truth:  we’re not done. 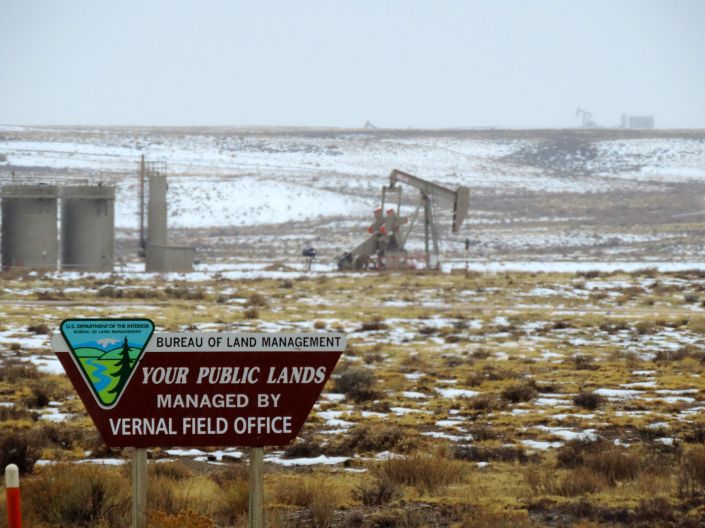 Trump:  I Am the Team – al-Baghdadi is dead – Lock Him Up! OpEDNews.com Headline – Trending on Tremr 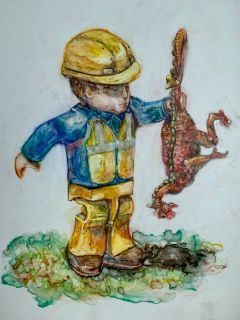 Trump says, I am the Team, al-Baghdadi was a screaming, whining whimpering coward, as though we were watching a movie, Russia was great, Speaker Pelosi kept out of the loop, pendulum Linsey Graham swinging continually between reasonably rational and extremely apoplectic, determined to grant his Impeachment laden benefactor headlines – assisting in sweeping our Kurdish allies under Trump’s rug of betrayal, covering up Russian Goose Step Party marching orders in, The People’s House.

When will we peer into our mirrors and question ourselves, how could we follow blindly, increasingly since 20 January 2001 inaugurated used 11 September 2001 as patriotic pablum to enslave the masses?

We should thank Donald Trump for showing us how low we can go, not just admitting, Syrian Oil is safe, and the hell with Kurds and American troops left in his whimsical harm’s way – but giving us the perfect Fascist throw-back image, so we’ll never again forget why those, rockets red glare inspired something in us to take the less traveled road of renewal, striving to be, a new generation of Americans—tempered by war, disciplined by a hard and bitter peace, proud of our ancient heritage.

Now that we’ve heard the bravado Bully Pulpit of Donald Trump and his blustering enablers, we need to recreate our initial intention, that all those the trumped would ban from life, liberty and the pursuit of happiness – were created equal to them.

Then, let us wash out the mouth of darkness, deceit and destruction descending from atop rented Gerrymandered government – for we’re either going to continue summoning foreign chaos and condoning Trump sanctioned domestic violent partners relishing in our derailment, or we rediscover our exceptional habit of faith in the justice of unity and equality – as rarely before.

In peaceful assembly, let’s seek to petition our government for a new birth of freedom, replacing Corporate PACs Red Mapping our Land of the Free, with a Red, White and Blue for every hue.

With malice toward none, let’s patriotically trade in our globe-trotting Attorney General and his criminalizing career DOJ civil servants.

Holding these truths to be self-evident, make a joyful noise to a world losing faith in America, knowing Trump may be the loudest, Cheney the worst and Pence the most hypocritical – but none are America’s first.

Reason suggests to the wise, it would be a mistake to think we can afford to wait until after Trump/Pence, to reset our moral compass.  Until we replace their GOP Impeachable offenses with

There can be no Life, Liberty nor the pursuit of happiness.

Let us question the current Right-Wing ideology financed to dominate our politics, healthcare and our children’s America – and be the voice of those silenced by the indifference of Conservative Caucuses.

Let us be the courageous solutions for Earth’s 21st century challenges.

Of course, we’re fatigued by our myopic media, that smirked too long before remembering 1930s Europe – and weary of the struggle to keep on keeping on, but we will survive when disrobing conjecture and denial in the realization that answers are not found in corporatism’s serfdom, but in the cathedral of rejuvenation, re-invigoration and reinvention.

The Honorable Elijah Cummings was a good man, but until all men are like him, we must keep our wits exceptionally sharp, our vision focused on the all-inclusive delight of liberty and our actions increasingly emulating the Good Samaritan’s, love thy neighbor as thyself – for, in our land, trouble now reigns from on high, in the underbelly of low places – threatening the very foundations of our Founding, while we sleep, manipulated by disinformation.

No matter our beliefs, dreams, hopes, politics or lifestyle embraces, we must now summon the courage to free the calm suffocating at the core of our self-inflicted turmoil and bring some semblance of singular light within our national darkness.

We need knock at the door of consciousness, trusting that peace will answer, and show us the way to renewal; Not the renewal of Cheney’s, So, as, We Tortured; nor believing our Civil War ever ended – and never again the past that allowed corporate profit to rise above the value of one human life.

Moving forward, post GOP’s Trump/Pence, we need to be better than we have ever been, knowing, Nature Bats Last. 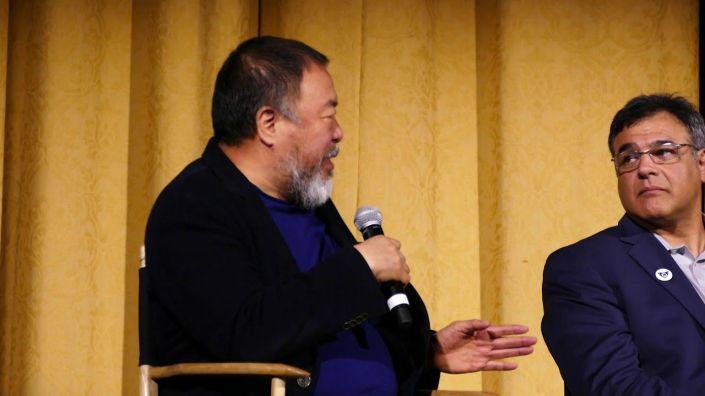